The Oregon Department of Transportation (ODOT) regulates motor carriers and administers their fuel and highway use tax payments. In exchange for providing the carrier with a license to operate large vehicles, ODOT requires some form of guarantee that tax payments are made. The easiest, least expensive way for a trucker to make that promise is to get the Highway Use Tax Bond from Jet Insurance Company.

As long as your reports are filed, suspensions are avoided, and all payments are made, the bond is only needed for your first year of trucking.

What Is the Cost of a Highway Use Tax Bond in Oregon?

Because Jet cuts out the middleman, we can provide the Highway Use Tax Bond for $75 for new Oregon motor carrier operations with fewer than seven trucks, the lowest premium rate in the market. For all other carriers, there are many factors that can influence the cost of the bond starting with the number of vehicles, carrier classification, prior violations, and your personal credit. Highway Use Tax Bonds cost between $75 and $1,500 depending on these factors.

*The cost of the Highway Tax Bond is based on several underwriting factors. Not all available price tiers are reflected in the above chart, and prices do not constitute an offer of bonding.

Can Jet File the Motor Carrier Bond With ODOT for Me?

Yes! While most agents, brokers, and carriers just mail you an original bond, which you have to sign and then mail to ODOT (hopefully they remember the raised seal and provide proper mailing instructions), that level of customer service is simply unacceptable at Jet. We know you need to commence, or resume, operations without delay so we immediately fax a copy of the bond to ODOT to activate your license. Even though ODOT allows 30 days to mail in the original bond with the raised seal, we process the original on the day the bond is issued (next day if issued late in the day) to ensure we have plenty of time to deal with any unforeseen problems.

With Jet as your surety partner, you don’t have to worry about anything but carrying your load.

Below is the address for ODOT if you would like to file your bond with any other paperwork you need to submit:

Why Does ODOT Require Truckers to File a Highway Use Tax Bond?

The Oregon Department of Transportation wants a guarantee that highway use taxes will be paid. Highway use and fuel taxes fund road maintenance and improvements, so if the road is used ODOT wants to ensure funds are collected for repairs. Unlike state and federal highway taxes charged at the pump per dollar of fuel, ODOT relies on mileage (‘highway use”) reports from motor carriers with large loads. If the motor carrier goes out of business, ODOT still needs funds related to the amount the road was used. With a bond, the surety company guarantees payment of all amounts due up to the limit on the bond.

The infographic below has more information on the Oregon Highway Use Tax Bond requirement: 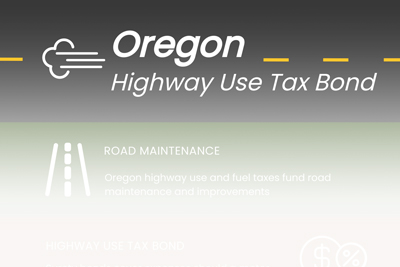 All brand new motor carriers, or existing carriers that have not previously operated in Oregon, need to purchase this bond. Until the trucking operation has established itself with a full year of operation in the state of Oregon within a three-year period, the bond must be active with ODOT.

The bond limit and consequently bond cost varies based on the number of vehicles utilized by the motor carrier, with the minimum being $2,000 and the maximum being $10,000.

Once established, motor carriers are not required to carry the highway tax use bond. However, if a carrier has had their license suspended, has outstanding bills, has not reported tax filings, or has not made tax payments on time, they will be required to carry a bond.

This bond can be waived once the motor carrier has all bills paid, suspensions lifted, and has filed all reports on time for one year straight. The bond amount starts at $2,000 and increases with the number of vehicles in the fleet but is never higher than $20,000. While the limit for the bond can be substantial the bond price ranges from $75 to $750 for established carriers.

Companies utilizing trucks in their operation that carry 26,000 lbs of freight or more and farmers are required to carry the Highway Use Tax Bond. Not all farmers need the bond and the exemptions are listed in the Oregon Revised Statutes.

For private carriers that only use gasoline in their vehicles, the bond limits are less as compared to carriers who use diesel or other fuels. Prices for these carriers range from $75 to $750. The minimum bond limit for gasoline-only private carriers is $500, and the maximum is $10,000.

Private carriers have different bond limits if any one of their vehicles uses diesel or other fuels. While the minimum bond premium is the same as gas-only fleet the bond prices go up at a slightly increased rate due to the higher bond limits. Bond prices range from $75 to $1,125, with the smallest bond amount being $750 and the largest being $15,000.

Do I Need to Renew the Highway Use Tax Bond?

Not typically, but Jet can help if you need to renew the bond. The Oregon Highway Use Tax Bond is not typically required after the carrier’s first year of operation, but a renewal could be required if a carrier has late tax filings, a suspension of its authority to carry over 26,000 pounds, or any outstanding amounts due to ODOT.

Conditions for a waiver of the Oregon Highway Use Tax Bond:

The Oregon Department of Transportation reviews the security requirement after one full year of reporting. They will mail a release (“waiver”) of the surety bond requirement if and when the agency determines the carrier has met the above requirements. Jet will check with ODOT at the 11-month mark and let you know if things are looking good for the waiver. If so, Jet will immediately initiate the notice of cancellation process with ODOT so you do not pay for any period on the bond that you do not need. If the bond is needed longer, Jet will quickly send you renewal terms for the bond so you have ample time to renew prior to the expiration of the bond.

If a carrier doesn’t meet the ODOT reporting requirements or is hit with a suspension the bond requirement will stay in place. Additionally, the bond limit may be increased if the carrier increases their number of trucks, owes money from prior accounts, or fails an audit by 15% or more for the required tax amount.

Do I Always Have to Provide Monthly Reports to Oregon Department of Transportation?

No. Motor carriers are required to file reports documenting vehicles, weights, miles, and taxes in order to document their tax liability and provide highway usage data to ODOT. New carriers are required to file highway use tax reports monthly. Carriers that have operated in the state for more than 12 months can apply to report usage quarterly. To qualify, ODOT requires a “clean and consistent” record of reporting and annual tax liability under $3,600.

Can I Cancel the Motor Carrier Bond and Get a Refund?

You can with Jet! The Oregon Department of Transportation must receive notice 30 days in advance for cancellation of a Highway Use Tax bond to go into effect. If you want to cancel your bond for any reason, Jet will promptly provide you with a full refund of any amount on the bond you haven’t used.

Jet cuts out the middleman so unlike many agents and brokers does not charge any cancellation, reinstatement, or other fees and unlike many surety bond carriers does not include any “minimum earned” amounts in their insurance rate filings.

How Do Truckers Avoid a Bond Claim From ODOT?

Motor carriers need to pay their taxes in full and on time to avoid a claim on their bond. The Oregon Department of Transportation provides a portal to make the tax payments online for all truckers.

The ODOT Audit Department will perform an audit to investigate the tax filings of each trucking operation. Typically, this audit is performed every three years. Truckers have 30 days to review the audit and make any corrections and/or payments necessary. If there is no resolution, ODOT will go after the carrier’s bond for taxes due and can collect from the surety company up to the limit on the bond form.

Motor carriers should avoid ODOT collecting on their Highway Use Tax bond since failure to reimburse the surety for any claim payouts will result in the suspension of the carrier’s permit they need to operate in the state of Oregon. If the claim is resolved, the motor carrier can be required to obtain the bond again for an even higher bond limit and start the clock over to receive a waiver on the bond. In addition, motor carriers that make late tax payments face 10-20% additional fees on top of the tax amount due with a maximum 25% fee if a tax report is not filed at all. ODOT can also charge interest of 1% per month until paid.

While Jet’s claims department always works hard to defend our business owner clients from frivolous claims, there is only so much we can do in the case of a government agency claiming it did not receive taxes due so be sure to maintain accurate, thorough records and make your tax payments on time. The State of Oregon provides a recordkeeping guide for motor carriers to reference. The most important takeaway from the guide is that carriers are required to submit a mileage tax report each month to cover operations for the preceding calendar month, including periods in which the carrier didn’t operate in Oregon.

ODOT allows carriers to file estimated weight-mile tax reports, however, the actual weight-mile reports must be filed within 30 days of the estimate. In general, ODOT frowns upon the use of estimates and imposes the bond requirement after the initial term on carriers that file estimates more than twice.

Do Truckers Need to Buy Other Bonds in Oregon?

Yes, but it depends on what you do. Motor carriers in Oregon are required to purchase and file the following bonds depending on their business activities:

Fuel Tax Bond: The Oregon Department of Transportation requires all suppliers of automotive fuel to file a surety bond.