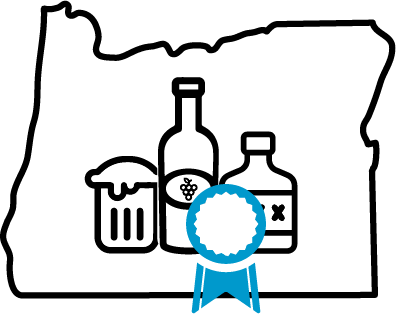 The Oregon Liquor Commission Control (OLCC) requires a surety bond for a brewery, brewery public-house, winery, direct shipper, grower sales privilege, warehouse, wholesale malt beverage and wine, and wine self-distribution business to be licensed. The bonding amount varies depending on the type of license and estimated tax liability. The bond is in place to ensure a license holder follows the Oregon Revised Statutes and pays all taxes, fees, or penalties.

Jet cuts out the middleman, brokers and agents, saving you money and time purchasing the bond. You can expect the lowest rates for the bond liquor control commission bond with Jet.

How Much Does A Liquor Control Commission Bond Cost?

With Jet, a liquor control commission bond can cost as low as $100 for an annual bond or $10 monthly. The bonding amount required by the OLCC can change the price of the bond, so be sure to let Jet know the bond amount required by the Oregon Liquor Commission Control. The OLCC allows only a maximum term of one year for Liquor Control Commission Bonds so it will coincide with the license renewal. Below are Jet’s lowest prices for a few different bond amounts as an example.

Jet has a no money down, no interest, monthly payment option that is one of a kind in surety bonds in addition to our low annual bond rates. Other brokers or agents offer payment plans with high down payments and APR, often through a third party financier that complicates obtaining the bond.

How Is the Liquor Control Commission Bond Filed to the OLCC?

Why Is the Liquor Control Commission Bond Required?

Many license holders with Oregon Liquor Control Commission assume the bond is just required to be licensed, which is correct, but does not tell the whole story. The bond is in place to ensure that license holders pay all taxes, fees, or any payment obligations to the OLCC; and in general, follow the rules and statutes for each license type as described under Oregon Statutes ORS 471 and ORS 473.

If the license holder causes financial harm to the OLCC and does not rectify the harm and the OLCC is unable to collect by other means, then the OLCC will seek compensation from the Surety Company. Essentially the surety company provides a guarantee to the public represented by the OLCC that those who deal liquor, beer and wine will pay their taxes.

The Oregon Liquor Control Commission oversees several licenses, certificates, and permits. There are eight licenses in total that require the bond that include:

There are some conditions in which a bond is not mandatory. Any license holder that has a tax liability below $1,000 for their reporting period can deposit cash with the OLCC in lieu of providing a bond. A few licenses including: winery, grower sales privilege, warehouse, wine self-distribution, and direct shipper, can waive the bond requirement based on Oregon Statute ORS 473.065 if the license holder does not expect to be liable for privilege tax for the upcoming year. Basically meaning the business is no longer engaging in manufacturing or distribution.

Other licenses and permits such as special event licenses, full on-premise sales licenses, and distilleries are not required to hold a bond.

How Can I Avoid a Claim On My Liquor Control Commission Bond?

Bond claims are a result of nonpayment of taxes and any fees or penalties associated with that. It is best to make privilege tax payments on time to avoid unnecessary fees from the state. Tax reporting and payments are due on or before 20th of each month for all license holders except for direct shippers and in some cases wineries. Direct shippers report and pay taxes quarterly by the 20th of January, April, July, and October. Wineries with a low tax liability can apply for annual reporting. If payment is not made by the due date, then the OLCC will add a penalty of 10% of the total required tax amount as well as interest at 1% a month.

The Oregon Liquor Control Commission has other means of collecting past due privilege tax aside from the bond. The OLCC can place a lien against the license holders property until the unpaid tax is collected. They can also seize and sell license holders property until they collect enough to cover the due taxes. The OLCC can utilize these two options, as well as going after the bond, in conjunction to collect the past due tax.

Additionally violations can result in penalties against the license holder; for a full list of common violations and the penalty sums for each, see Oregon Statutes OAR 845-006-0500.

What Happens If I Get A Claim On My Liquor Control Commission Bond?

Claims on the liquor control commission bond are rare, but if it happens inform Jet immediately. If the OLCC contacts Jet first regarding a claim on the bond, we will inform you immediately.

While Jet always works on your behalf in fighting claims, there is little room to debate when the state is saying they haven’t received payment for taxes. We will diligently look over all paperwork from the Oregon Liquor Control Commission to ensure what they are requesting is accurate and within appropriate time frames. Our goal is to limit the burden of a claim if they happen and ultimately educate you to help prevent claims before they occur.

Keep in mind that if a Surety pays out on a claim, you are responsible to pay back the Surety for that amount. The bond is not like other forms of insurance that cover accidental damages. You are responsible for paying OLCC’s taxes. The bond is simply a letter of credit showing the state that the tax is guaranteed to be paid by the Surety, if not by you.

How Do I Renew the Liquor Control Commission Bond?

The OLCC will send a renewal packet every year for your license renewal. The OLCC will advise in that packet whether or not a change in the bond amount is required. Let us know if there is a new amount required and we will determine if there is any premium change. If the renewal price needs to be changed, Jet will adjust the renewal invoice to reflect the new premium, whether that be higher or lower, for the monthly payment or annual renewal option.

License holders paying the bond on an annual basis need only to submit payment before their renewal date. If the bond amount changes Jet will send over the updated quote for renewal. Unlike other insurance companies who require a lot of paperwork for renewal, Jet only needs payment to renew the bond.

Jet will inform the OLCC about the renewal and extension of the bond promptly. The OLCC requires a new bond or bond continuation every year for the license renewal.

Can I Cancel the Liquor Control Commission Bond and Get a Refund?

Yes you can with Jet! We can quickly file a cancellation notice to the Oregon Liquor Control Commission and return unearned premium. The bond has a 30 day cancellation provision meaning that the bond will not cancel until 30 days after we request cancellation of the bond. Bond premium returns take into account the cancellation period where the bond is still active as Jet is still providing coverage at that time.

If you miss a monthly payment we will send you notice before a cancellation is filed to the OLCC to provide you with time to make payment. Life and business can be distracting and Jet’s team is understanding of that fact as we work with you if a payment is missed. Other carriers leave management of payments to third party financing companies who have no control over bond filing, leaving you to chase down who to make payment to, how to get a bond reactivated, and more often than not dealing with people who are indifferent if your bond is cancelled. Most often these are not even the people who sold you the bond!

Does the Oregon Liquor Control Commission Require Other Insurance?

Per Oregon Revised Statute 471.168, licensed premises serving alcohol must carry a bond or liquor liability insurance for at least $300,000 to provide coverage for injuries resulting from serving alcohol to a person who is visibly intoxicated. The Oregon Liquor Control Commission can require a higher amount of coverage on a case by case basis. This is only required if alcohol is being served on-premise; businesses like wineries, breweries or grower sales privilege can waive the requirement if they provide an affidavit to the OLCC at license issuance or renewal stating they will not be serving alcohol.

Is the Liquor Control Commission Bond Called Anything Else?

The surety bond required by the Oregon Liquor Control Commission is called a variety of things by insurance companies and the OLCC itself. Insurance companies commonly refer to it as an alcohol or liquor sales tax bond The OLCC may refer to it as a liquor control commission bond, OLCC privilege tax bond, or simply “the surety bond.” All of these names can describe the same bond required by the OLCC, but to ensure you get the correct bond simply contact us at Jet. We ask the right questions to quickly and efficiently get you the bond you need. 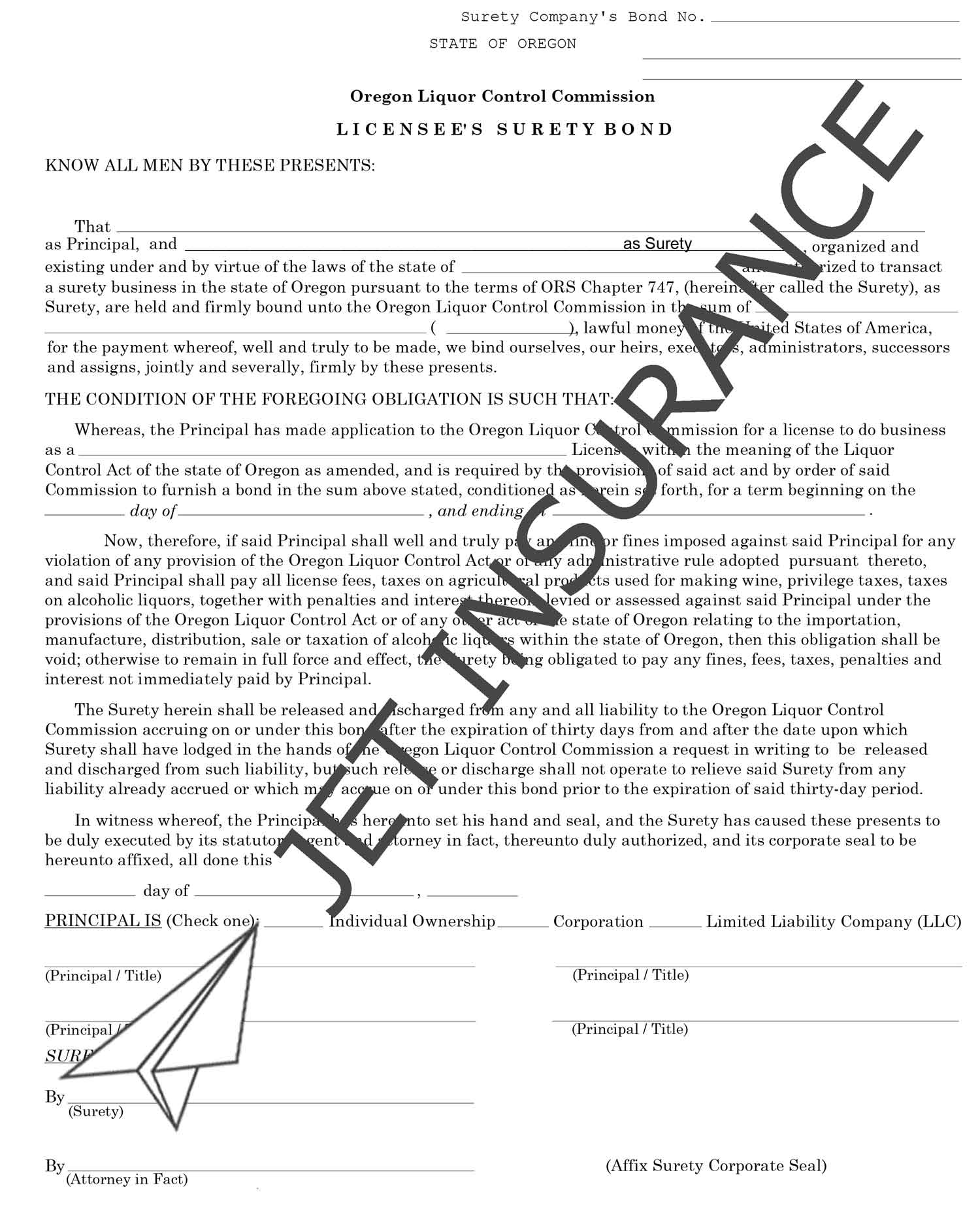